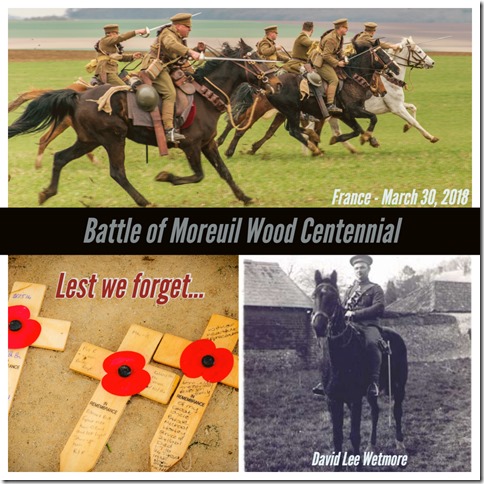 On our France trip in March-April 2018 we attended the Centennial Commemorations for the Battle of Moreuil Wood in honor of my grandfather, David Lee Wetmore, who fought in this battle. This battle is purported to be the last cavalry charge of modern warfare. A reenactment of the charge was performed by members of the Lord Strathcona Regiment of the Canadian Army, which is still an active armored regiment.
We also visited other WW1 sites in northern France and Belgium.

During the massive March-April 2018 German offensive there was chaos all along the front in Northern France. French, British, Canadian, Australian and other Allied units were being pushed back towards Paris. In a wooded area on a ridge above the town of Moreuil France German units took positions that overlooked a main rail line from Amiens to Paris and threatened to cut off this vital link. Units of the Canadian Cavalry Brigade (CCB) were assembling nearby after a long fighting withdrawal in the face of the powerful German advance. It was decided to push the Germans out of Moreuil Wood.
The Canadian horse cavalry regiments including Royal Canadian Dragoons (RCD), Lord Strathcona Horse (LSH) and Fort Gary Horse (FGH) charged across open fields under heavy machinegun and artillery fire towards the German positions in the thick woods. The RCD, including “A” Squadron   (my grandfather’s squad) galloped into the north part of the wood and had to dismount and engage in brutal hand-to-hand combat. LSH “C” Squadron led by Lt. Flowerdew made a daring charge around the NE side of the wood. Flowerdew was cut down during the charge and mortally wounded. He was awarded the Victoria Cross posthumously. Flowerdews’ sergeant, Tom Mackay, continued the charge while suffering numerous gunshot wounds.

A number of years ago I was contacted on-line by Bob Mackay, a Canadian author, regarding my grandfather's WW1 short stories had I published on a blog. Bob wrote a historical novel about WW1 Canadian cavalry titled "Soldier of the Horse". Bob's father was a sergeant in the Lord Strathcona Horse Regiment and fought in the battle of Moreuil Wood. I started researching my grandfather's WW1 actions and found that he was also in the same battle, but in a different regiment, the Royal Canadian Dragoons.

Bob introduced me via email to Jean-Paul Brunel, a French farmer from Moreuil France. Jean-Paul worked the land where the original battle was fought. In the 1986 Jean-Paul found the remains of a Lord Strathcona Horse trooper, John Willoughby, who was listed as dead, but who's body was never recovered. After a number of years of research Willoughby descendants were located in Edmonton and the remains were returned to Edmunton for full military burial. Jean-Paul traveled to Edmonton to meet the Willoughby family and he was embraced by the Strathcona Regiment. Since then Jean-Paul has been the inspiration and driving force bringing together the local French authorities, business communities and veteran groups as well as Canadian and British military and veterans groups in the planning and eventual execution of the Moreuil Wood Centennial Commemoration activities of March 30 & 31, 2018.

On our visit to Normandy in 2013 we stopped at Moreuil to meet Jean-Paul for the first time. He brought us up to the battle site and showed us his collection of WW1 artifacts. It was great to see him again at the Centennial and he was obviously proud and visibly emotional at the culmination of all his efforts.


Images from our trip (click on "Read More" for slide show)

Learn more about the Battle of Moreuil Wood and Centennial